Live at the Music Gallery 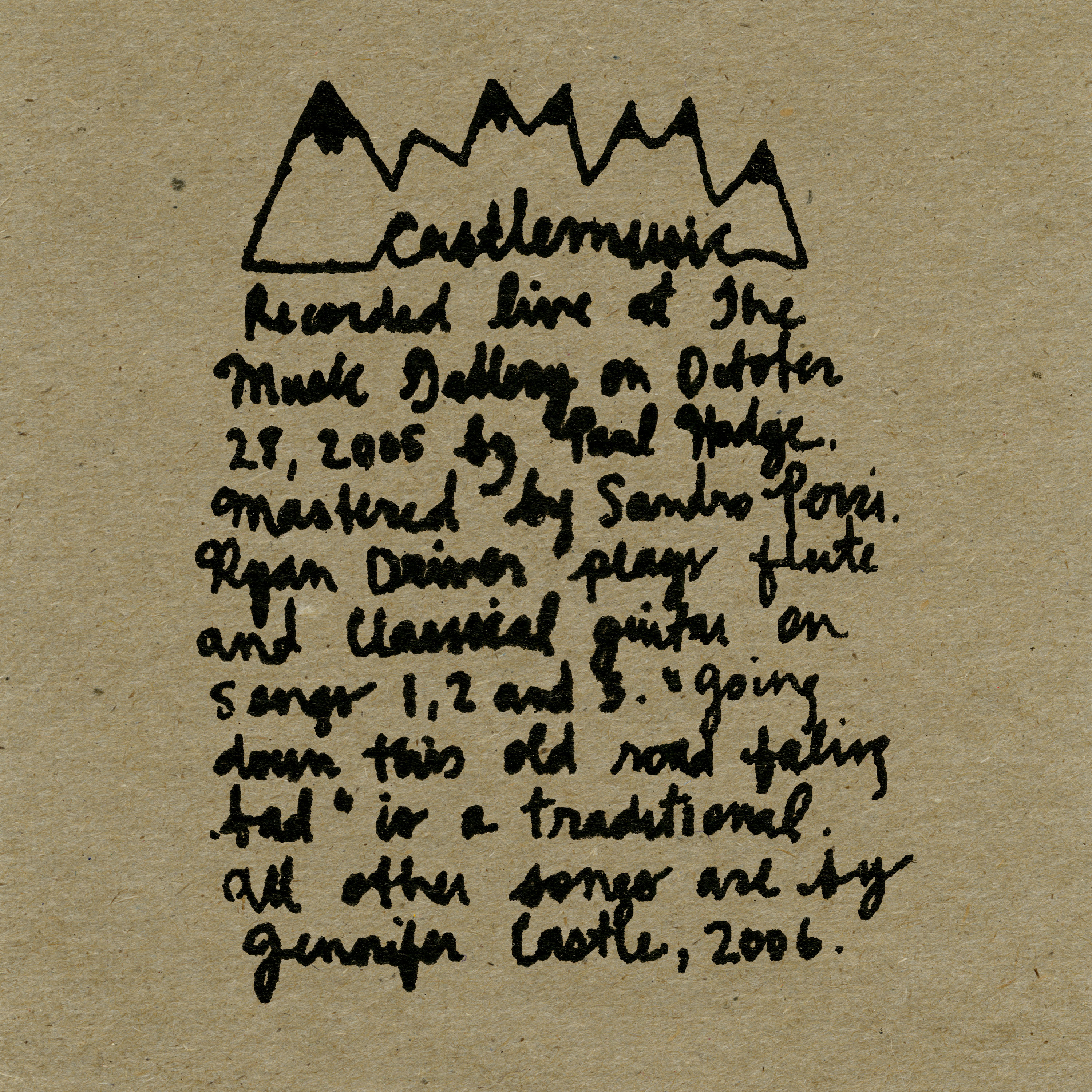 Live at the Music Gallery

This is a pre-order, ships for December 21st

We here at Idée Fixe are incredibly happy to announce that we are releasing Castlemusic’s Live At The Music Gallery for the first time ever on vinyl. A performance that celebrates its 16th anniversary this year, Live At The Music Gallery perfectly captures the tone and aura surrounding Jennifer Castle’s early performances. A treasured possession of the lucky few who purchased a copy on CDR at Jennifer’s early shows, it has long been out of print. A must-have for any Jennifer Castle fan, the album is strictly limited to 500 copies worldwide and is pressed on white vinyl and, as revealed, is a recreation of the original release resized for an LP form.


Heartache, broken heart, heart broken down.
Tired heart, lonesome heart. Blue World.
Broken by and for love, time, trouble, and the world.
Bluesy stuff.
And the blues shares a psychedelic world with many musics:
old jazz standards (Billie Holiday, Beverly Kenney),
Country music (Willie Nelson, Loretta Lynn),
R&B (Al Green, Erykah Badu).
What they all do, or have in common as a musical encounter, is how this heartbreak
is transformed by song, how the song encounters the world,
and the listening world encounters the song.
How it plays: with words, language, sentiments, and how the words, sentiments and language; are transformed by the rhythms, cadences, melodies and textures of the song.
The subject of all wonderful song is song itself.
The I, the me, the you, is socialized.
The song sings.
Great songs always seem to drop or float to us from nowhere.
The song carries itself.
An encounter with a sentiment.
Not a sentiment coming from the singer.
It comes from the voices
over a tambura amp hum.
Singing is the space between the voice and the singer;
a space where curiosity produces intelligences and curiosities.
It always seems strange to hear that someone “uses their voice like an instrument”.
A voice without words is an instrument?
Words do not deactivate the human voice from being an instrument.
It is an instrument.
The words form embouchures, filters, wahs, and tease out cadences and rhythms.
I am talking about Castlemusic’s Live At The Music Gallery.
These songs seem to play themselves, and Jennifer blows into the bellows to get them going and then air does the rest
and transforms the menacing life
into new and unknowable forms of joyfullization.
A drunken guitar of downbeats, bent notes, bent chords.
Everything bends here.
A weeping willow.
Somewhere along the lines of the bent notes and downbeats of Jessie Mae Hemphill
and the reflective blown-out (and bent again) lyricism of Loren Mazzacane Connors
This music dances.
They play along with gravity.
Buster Keaton Ballads.
And the swaying head of the singer,
a softshell maraca,
again moving air around in front of the microphone
to the dance of the song
with the consummate psychedelic accompanist Ryan Driver,
heard here on flute, voice and sliding nylon-string guitar
always sounding as if he is dropping in midway through an alap.

Sailor’s Blessing
I might marry that man to teach myself a lesson, ooh (no one ‘oohs’ like Castle) a lesson.

Make A Man
Gonna make a man out of me.
Gonna climb that tree.
He thinks I am like the breeze.
He thinks I’m a pile of leaves
Oh he say baby and he don’t mean me.