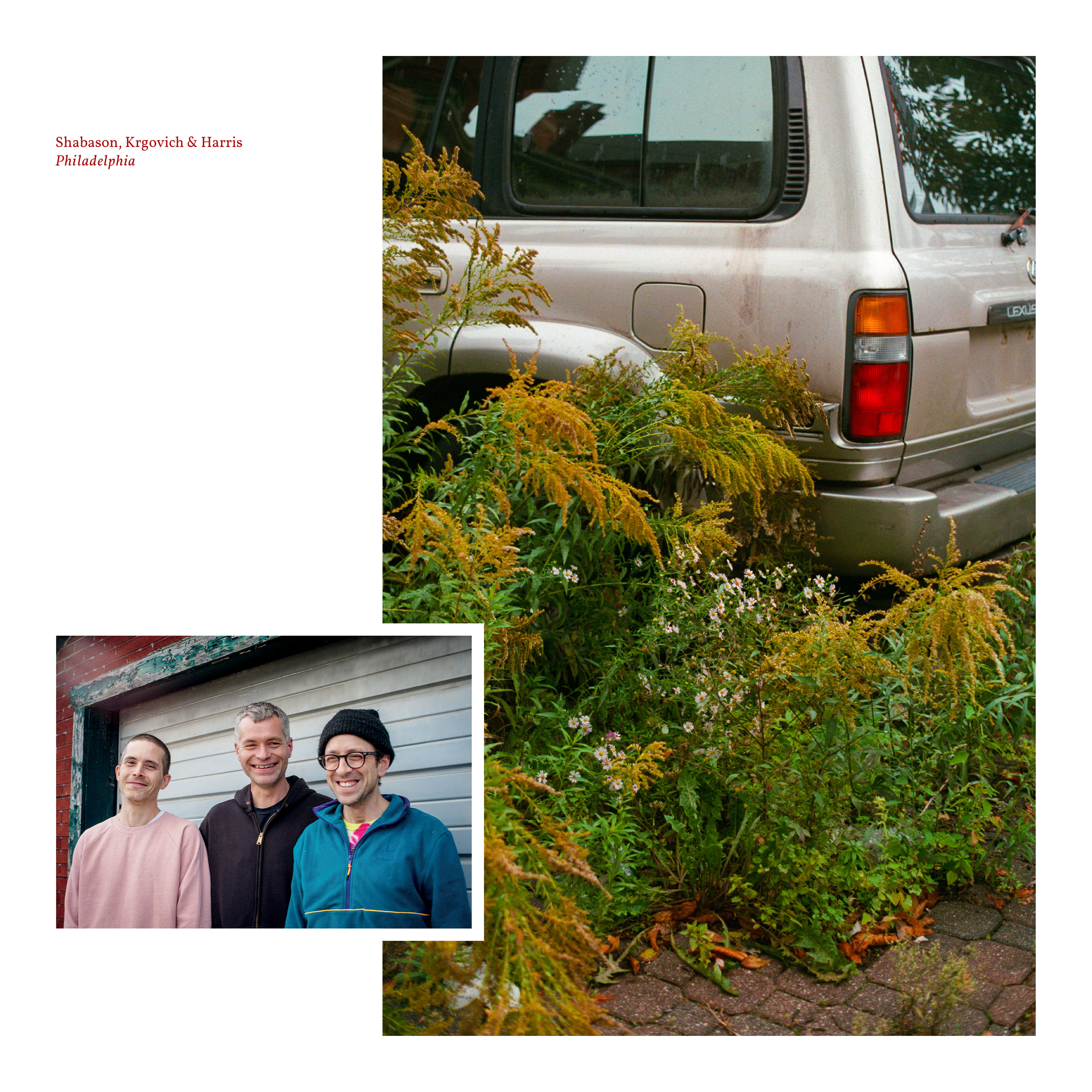 The protagonist of Icelandic writer Halldór Laxness’s 1969 novel, World Light, gives a tearful goodbye to the grains and knots of his attic ceiling when he leaves after years spent staring up at them, bedridden. On their album Philadelphia, Nicholas Krgovich, Joseph Shabason, and Chris Harris chase a similar kind of romance toward the mundane and miniscule details made more visible by the world’s newfound relationship with the Great Indoors. The three musicians, who convened on a shared love of New Age music, create a space of sonic refuge out of softly electrified textures, burbling live instrumentation, and Shabason’s lacquered synth work, all of which support Krgovich’s koan-like poetry about showers before bed, dusty minivans, sips of gatorade, and the modern minutiae rendered beautiful by mere observation.

Contrasting the forced trend of remote collaborations, Philadelphia was recorded across three days of sessions in Toronto, pre-COVID. “Somewhere back in 2018 we started to pass demos back and forth over email and we quickly got about eight song sketches together,” explains Shabason. “Then in fall of 2019 we all realised that if we didn’t get into the same room together we were never gonna finish this album.” The trio’s physical proximity while recording underwrites the hushed tones that pervade the album, which itself reads like the kind of quiet, personal conversation that can only happen in close quarters lest it be washed away in the din of public life. Philadelphia establishes this immediately with Osouji, a track whose gentle intro of balmy synth and crickets suggests a sunrise and sunset equally. Bathed in calm light, Krgovich sets a scene not unfamiliar in this day and age: “Garden pebbles underfoot / the wet bamboo / been inside all the day / deep cleaning room to room.” Krgovich wrote the album’s lyrics under the self-imposed philosophy of “first thought, best thought” admittedly avoiding the well-trodden subjects of romance, love, and heartbreak. He chooses instead to reveal the romanticism of the world hidden in plain sight while Harris and Shabason deepen the sentiment with reflective, instrumental excursions. Whispered, conversational synthesizers fill out Tuesday Afternoon over a backdrop of birdsong, and vocals make only brief appearances near the track’s beginning and end. Conversely, Friday Afternoon is lyrically driven, and delivers an anthemic refrain that constitutes one of the most emotional moments of Philadelphia. After a postcard-like recounting of seeing a roadside stranger experience car trouble, Krgovich repeats the hushed mantra “wrap your loving arms around it”, almost as a call-to-action for embracing the present moment as it is instead of as it ought to be. I Don’t See the Moon is a lighter mood by comparison. With its jazz-tinged interplay of piano and guitar, complete with a gliding electric bass line, the song provides levity, but is no less introspective than the rest of the collection. Waltz serves similar ends without much interjection from the drums-- the beat is instead implied by the rhythm of Krgovich’s vocals that bear a subtle smooth RnB influence as he paints a picture of his residential surroundings: “and all the cactus gardens growing right on through the fences / and the flowers over high walls / and the houses all the way / down, down, down.”

Throughout Philadelphia, as with his solo work, Shabason and company intelligently reshape 90s adult-contemporary aesthetics for more experimental aims in a world where genre walls are permeable, and no juxtaposition is off the table. Even the album’s title track is a cover of Neil Young’s theme from the 1993 movie Philadelphia, which in turn takes its name from the so-called City of Brotherly Love. Shabason himself prompted the rendition via text a few days ahead of recording. “I asked if it would be crazy for us to cover it, to which Nick replied that he used to all the time with another band,” he says, “and Chris was very much on board as well. A few weeks later Nick told us that he’d been calling the record Philadelphia and the rest of us agreed that it seemed like the right call. It’s the city of brotherly love, and this album was three grown men in a room together making something over which we literally had zero disagreements or conflicts. It was truly a first for all of us in terms of making an album that was a group effort, so calling it Philadelphia made sense.” Their cooperation has produced an endearing exposé on the beauty that exists right under our noses, in the mental spaces and living spaces that our present circumstances are commanding us to get to know better.